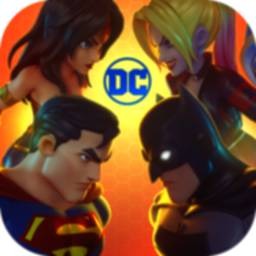 As you probably know, DC is the most famous entertainment brand in the world today, along with Marvel. DC universe with many different characters, developed many forms of entertainment such as comics, cartoons and movies. In addition, this brand was also chosen to develop another area that is mobile gaming. Recently, a newly appeared game, developed based on the DC universe, is the DC Battle Arena.

DC Battle Arena is a role-playing game, developed by Electronic Soul. This game was just released on Google Play yesterday as a test. Immediately, the game has attracted the attention of the global gaming community. And the keyword search game downloads DC Battle Arena increased rapidly in two days today. Let’s find out what this game is special about, and how to download it.

A game copyrighted from DC

The topic of exploiting famous brands to develop games is not new. There are many developers who rely on brands like Marvel, DC, Disney, … to develop for their products. Among them, there are also some companies that do not receive image copyright and permission from the brand owner. Therefore, copyrighted games are always preferred. And Electronic Soul has received a copyright from DC to create this DC Battle Arena game. Therefore, players can be assured of DC Battle Arena.

In terms of gameplay, DC Battle Arena is developed in the role-playing action genre. And it also incorporates elements of the survival game. It is a safe circle system, forcing players to come together to fight. At the beginning of the game, you will be able to choose for yourself any character in the DC universe, such as: Superman, Batman, Wonder Woman, Harley Quinn, Green Lantern, Nightwing, etc.

The battle in the game will take place in 2vs2 format in real time. This PvP mode is also the main game mode of the game. You will team up with another player, and fight another team. The most important element in this game is the combination of two players in the team. You need to know how to coordinate and support each other in the match to get the best results. In addition, you must also study the fighting skills of the characters to make a reasonable battle plan.

Regarding the map of DC Battle Arena, the game will be symmetrical and divided into 3 completely equal, not random like other games of the same genre. You need to choose the battle areas that are beneficial to you because there will be two different teams that have the same goal.

For the image, the DC Battle Arena game makes a good impression with high quality 3D graphics. In terms of design, the game was created based on the original image of DC. It is to create figures for characters in the game that will resemble DC cartoons. However, the visualization in the DC Battle Arena game is a bit more minimalist, but still enough for you to recognize familiar characters. In addition to the sound effects, the soundtrack of the game will bring the best experience for you.

Currently, the new game is only in the process of testing for you to try it out. Therefore, we are unable to provide you with the DC Battle Arena MOD version. Expected, we will bring features God Mode or No Skill CD for this game. As soon as the game is officially released, we will bring the MOD version as soon as possible.

Overall, DC Battle Arena offers a unique and unique gameplay. It is a combination of action role-playing game, strategy and survival. But with the theme from the DC universe, this game has received the attention of a large number of players. Especially the fans of DC. Currently, you can try this game through our DC Battle Arena APK. And the MOD version will be available soon, please wait for it!