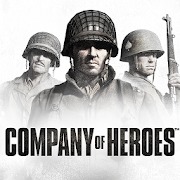 The publisher Feral Interactive has just introduced the cult PC game Company of Heroes for mobile platforms in early September recently. Specifically, the iPhone and iPad versions have been released on the AppStore. And the version for Android is already on Google, expected to be officially released in a few days. Accordingly, this mobile version will be sold at a pretty high price, up to 13.99 dollars. This price may vary depending on your region.

As a reminder, Company of Heroes debuted on PC back in 2006, and is set in World War II. You will be brought back to the second world war, where chaotic wars were happening. You play as a commander, leading your army to fight the enemy in chaos.

Company of Heroes is an extremely engaging real-time strategy game. It’s combined with an engaging mix of fast-moving campaigns, dynamic combat environments, and advanced squad-based tactics. Participating in the game, you are commanded by two companies to raid US soldiers and direct a fierce campaign at the European Operation Theater. Begin your journey of conquest with your good army.

This game has a quite unique tactical mechanism when it does not follow the mechanics of familiar RTS games such as recruiting people – exploiting – building houses – recruiting troops. Instead, Company of Heroes uses a scoring mechanism to win passive resources. Thanks to this mechanism, players will not have to worry much about economic development. And you just have to invest in developing your army and fighting on the battlefield.

It is also because this strategic gameplay focused on combat helps Company of Heroes to attract a large number of players. Of course, the game still requires players to know how to build strategy, while changing tactics appropriately in the match.

Graphics are superior to mobile games

As in the first PC release, Company of Heroes is known for its cutting edge graphics. It gives players an extremely impressive experience. And the Company of Heroes mobile version was released, considered an adaptation of the PC. But the image quality of this version has not decreased.

Company of Heroes still possesses outstanding high-quality 3D graphics. When you experience the game, you will feel like being directly involved in the 2nd world war. From the character system, landscape, environment, visual effects, … everything is designed. very perfect. In general, the graphics of this game make it different and superior to today’s mobile games.

As introduced, Company of Heroes is a game with great graphics quality. But that main strength comes with the drawback of the game. Because a high quality game will require a gaming device to have a high configuration, large enough internal memory. It is known that the mobile version of Company of Heroes requires at least 5GB of free memory in the device. So many players are difficult to experience this game. Or you can download it, but not get the best experience.

We don’t need much review on Company of Heroes APK, as it’s already a hit game. Both the gameplay and the game’s visuals are great, highly appreciated by game experts. The only thing bothering about this game is simply that Company of Heroes requires a highly configurable gaming device.