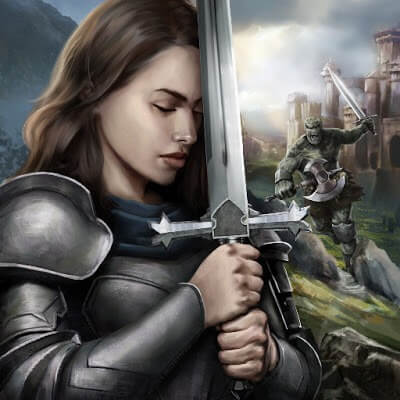 A huge quest awaits you in Champions of Avan! Exploit resources, command workers to build, develop a dry land. Destroy and defeat every enemy that dares to stand in your way! Open a new empire and you are its ruler!

Dungeon Village 2 and Forest Camp Story are two games with similar gameplay but different content. They are highly appreciated by many players, you can download and try them out!

Produced by Early Morning Studio, Champions of Avan is a hybrid game from many genres. It has elements of strategy, management, role-playing and even tower defense. It is this diversity that creates an attractive and attractive game from the gameplay. This is also a game that requires a balance between intelligence and ambition. Here, you will show your full potential to develop the most wonderful Avan town of ancient times. With only rudimentary tools and human power, can you make great achievements?

Avan is an unassuming little village located in a corner of the land of Rokmyer. It is a land rich in timber resources, especially oak trees. Of course, there are many other minerals and resources that have yet to be discovered and exploited. You – a smart-minded person has been sent and tasked with clearing this village. By all means, you must make Avan prosperous and great, to be worthy of a heroic land in the history books!

Located in the middle of an oak forest, logging is extremely easy. With endless wood resources, you can build countless different facilities. Besides, gold and iron mines will appear scattered around the village. You need to navigate and mine these precious resources in order to grow. Obviously, gold can do many things: buy equipment, hire workers, build an army… Iron mines allow you to make weapons, armor… A powerful empire needs enough. many factors, the most important of which is the military. Therefore, spend the majority of your labor on mining resources in the map.

First, you need to build the main house to be the center of the village. From there, develop other facilities around it. You can build brothels, military areas, markets, towers… In which, the military area is mandatory because you need to defend against other empires. Besides, you can also rob resources from enemies if you have a strong military. Towers are your base for defense from a distance and are extremely useful in detecting unusual intrusions. The market is where you exchange resources, such as selling wood for gold and vice versa. And so many other models you can build, check them out in the list.

Maximize your empire to become stronger. The map of Avan is quite large, you can control all this land to become a great empire. Build facilities everywhere, cooperate with many other empires… There are many ways to grow, it all depends on your mindset and mindset.

You can’t build an empire peacefully! In this land of Rokmyer there are always forces hostile to you. They are ready to rob resources, invade territory, even erase you from the map. Therefore, you should actively defend the area, be ready to fight them. In addition to retaining resources, you also show your position. You don’t just defend, take the initiative to lead your troops to attack the neighbors and gradually expand your cold territory.

Champions of Avan is a 2D game with a classic style. Buildings and characters of ancient wartime, bring you a new experience. Without modern tools, you will build your empire with the most rudimentary items. The character image is also diverse with many generals in the history of war. When you join the game for the first time, you can easily feel the real atmosphere of ancient times. The right soundtracks are played continuously, making it easier for you to immerse yourself and have a better experience.

The MOD version will make it easier for you to grow your empire, consider using it!

Managing and developing a powerful empire has never been easy! Champions of Avan gives you an attractive, attractive gameplay. Classic images and graphics create many new experiences. No one can feel your journey, download the game now from the link below!