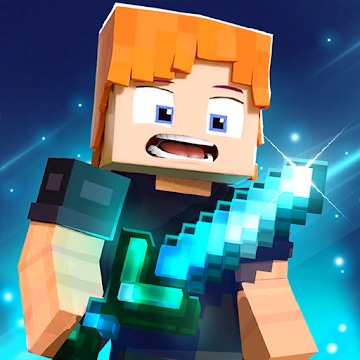 Welcome to the great defense strategy game – Blo’k Warriors. Summon Blo’k warriors to defend the base, while destroying the enemy base to win. If you have ever known the game Plants and Zombies, then Blo’k Warriors has a similar gameplay but certainly much more attractive.

Summoner Merge TD is also a defense strategy game, would you like to try it out?

Blo’k Warriors is the most anticipated base defense game right now. This game requires you to have a strategy and command the warriors appropriately. We believe Blo’k Warriors is a game worth experiencing because of the impeccable graphics and sound quality, improved classic goalkeeper gameplay.

In the match, you will have a blue flower collector. This is very important for you to upgrade your base and summon troops. Depending on the level of the base you can hire additional collectors. For example, base level 2 could hire 2 people, base level 3 could hire 3 people. The more people collect, the faster the quintessence sword earns. This directly affects the speed of your troops summoning. In addition, sometimes blue flowers will randomly drop in the map, you can pick them up.

Upgrading your base is very important in every battle. First, it will increase the total HP and defense stats so that it can withstand multiple attacks from the enemy. This will give you plenty of time to deal with the emergency situation. Besides, the upgrade will help you summon more advanced and powerful Blo’k soldiers. They will help you to easily defend and destroy the enemy base. However, upgrading the base will take a lot of effort. Do not be too engrossed in contributing quintessence to upgrade the base but ignore the summoning of soldiers to defend.

When you have summoned 2 identical soldiers, you can click “Merge” to merge them into a high level soldier. In addition, upgrading the base also allows you to summon much more powerful soldiers. They are the key factor for you to win every match.

This is the most engaging mode in Blo’k Warriors. This is a tense intellectual battle between two supernatural minds. You and any player will compete, winning the match will receive rating points. You can accumulate points to be able to climb high on the world rankings. Standing on par with the best players, can you do it? Each week will refresh the world rankings and distribute rewards to players. If you achieve high rankings, you will receive extremely valuable gifts.

Blo’k Warriors currently has more than 50 different soldiers, which will increase in new updates. Their rarity will be based on the color of the border around their profile picture. The borders are arranged by: silver <blue <green <yellow. Soldiers with yellow borders and surrounding dragons were extremely rare. If you own them, you can already win.

Collect puzzle pieces to unlock characters. Once unlocked, you can upgrade them to increase strength. Each upgrade will cost a certain number of pieces and gold coins. Each character includes stats: attack, attack speed, HP, movement speed and attack range. These stats are increased after each upgrade.

You can get pieces of the character through many features. Can be mentioned as events, quests, treasures. Spinning treasure will cost Gems, but there will be a rare character rate.

Blo’k Warriors brings you pretty classic 3D graphics. The characters are built from blocks, making them unique compared to similar games. The control interface is tailored for you to easily command and manipulate. Smooth character action and epic skill effects. Besides, the background music changes flexibly to give you enjoyable entertainment moments.

You will receive a large amount of gold coins and diamonds from the very beginning. You can use it comfortably to spin treasure, upgrade …

Stop the enemy from destroying your base with powerful and unique Block warriors. Join the game Blo’k Warriors, you can show your strategic thinking and command ability. Win every victory and achieve high rankings in PvP battle mode, the other players will be amazed at your talents. Blo’k Warriors deserves the most exciting goalkeeping game of all time that you should not miss!