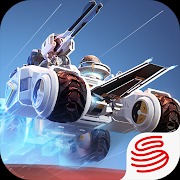 Astracraft is a Sandbox and real-time combat game that has just been officially released. Coming to the world of Astracraft, you will immerse yourself in a modern science fiction great. Join us so you can experience the battles of limitless creativity.

Released by NetEase Games, Astracraft is considered a breakthrough in the field of Sandbox and combat. This game possesses attractive gameplay plus extreme 3D graphics. Diverse gameplay with many different game modes, Astracraft will give you many interesting and unique experiences. Are you ready?

One of the unique features of Astracraft is that you can design your own model for your battle machine. Use your rich imagination to build the perfect ARSM. Regardless of the shape you want, it can be built in the game: robots, race cars, tanks, fighters … Break your imagination to design unique, stylish combat machines. way.

No two drawings are alike! Incorporates available technologies for installation on your battle machine. Hundreds of high-tech equipment, state-of-the-art weapons for you to choose from. Combining limitless and limitless power, you will have the most beautiful and powerful model. You can also design multiple drawings to create as many models as you like.

Tense sci-fi battles break out, you have to stay alive to the very end. A battle of supreme technologies that you could only have imagined before. Now you can directly participate and bravely fight for life. Use your best weapon to attack where the opponent least thought about. Join your teammates on strategies: decoy, stealth attack, diplomacy, air battle. Based on the context and the course of the match, you need to come up with a reasonable strategy. The last survivor will be the winner, with no room for error.

Astracraft has a variety of different game modes for you to change. In addition to single combat mode, you can also combine with teammates in other modes.

Astracraft made us extremely impressed by its amazing 3D graphics. Background science fiction era, models, combat machines are extremely beautiful. The effects of combat, explosion, laser weapons from weapons will make you feel dull, amazed because it is so excellent. You will feel a fiery, intense, and authentic sci-fi battle. Once you enter the match, you will definitely not be able to take your eyes off for even a second. Sound effects from weapons and machines also contribute to a fascinating battle.

Astracraft is a breakthrough in both gameplay and graphics. Just experience, we immediately want to recommend to you because this is a great and excellent game. Please join us to experience this great game. Note, you need to download the obb file to be able to install the game on your phone.