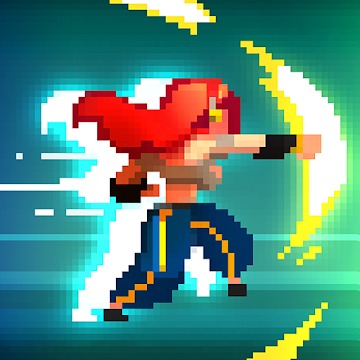 Chilly Room, the father of Soul Knight, which has been popular for many years, has just released a new product. This game is called Otherworld Legends, a classic action role-playing game. The game was just released a few days ago, available on both Google Play and AppStore, completely free.

Otherworld Legends MOD APK has been introduced by the developer for a while. Until now, this game was officially released. Players can download the game and experience the game with full features. Just a few days after being released, the game has attracted many players to participate. It quickly achieved over 100 thousand downloads and 10 thousand raiting in just a few days.

Ausurendra – the master of power created a virtual space. There, the most elite warriors in various dimensions were summoned. You are one of them! Participating in the training class of Ausurendra, you and other heroes must overcome countless difficulties and challenges. In the end, one person will be chosen to help Ausurendra uncover the long-buried secret. Can you overcome all of these challenges?

The gameplay of the game

Otherworld Legends is inspired by both Eastern and Western styles from many stages and periods. Accordingly, the character system is also shaped according to this unique theme. The game has created a beautiful fantasy world with romantic landscapes such as tranquil bamboo groves, meditation grounds, underground mausoleums to dreamlike illusionary palaces, …

Regarding the control keys, the game Otherworld Legends is designed quite simply. Still the scroll button in the left corner of the screen and the skill buttons in the right corner like other action games. Surely you can play the game proficient right from the first time, no need to get used to.

Ausurendra has summoned many elite heroes to this illusion. Therefore, you will have a lot of characters to choose from. All heroes are present in the original room. There, you can see all the information about them: stats, skills, weapons … You can choose a character of your choice to participate in the upcoming mission. Each person will have their own unique fighting style, from melee, long-range or magic.

You will collect a lot of gold and items when defeating monsters. The items you get are mostly support items. It can be mentioned as a potion, a temporary buff … Gold is very important, it helps you buy weapons and items that increase stats while at the training club.

Because there are many different fighting styles, so the weapon system is also very diverse. Gloves for melee characters, bow for ranged combat and magic wand. The item fusion feature helps you combine the best equipment with your fighting style.

The vast and varied screen system is also the strength of this game. It gives players an endless experience. The long and challenging mission stimulates the player’s morale. Each screen is designed in the style of squares. To be able to move to the next square, you need to destroy all monsters in the current location. The final square will appear a lot of monsters, and only by defeating them all, you can change scenes. Each level will also have a secret square to give you support items, make use of them.

The layout of buttons and skills in RPG, action games is not too strange for today’s players. However, Otherworld Legends can also assist players to choose their own goals. This makes it easy to aim your skills at enemies and launch amazing combos with just a few taps. The smooth movement of the character also helps the player to have more precise manipulations.

Reviews from users are always the most honest comments. From there you know the exact pros and cons of this game. Here are the reviews on Google Play, you can consult.

“The game is good for supporting 5 stars, the game should buy jade characters and get more characters”

“The game is very good and has interesting and outstanding features such as: The game for free characters is very strong, does not cause inhibition or the feeling of the free character is not equal to the characters who are recharged to buy. 2 is a game with a lot of items, so we will have a lot of different ways to get through the level 3rd: The game has an infinite upgrade mechanism so the more you play, the stronger the point is. and especially compared to other Rouge Life series. There are many other interesting things to play and feel. “

“The game has a high difficulty, challenges the player, the pixel character is very nice. Sound effects with equipment to support the character are also many and combined more. There is a newer update for this game, thanks! “

“Suitable for those who like hardcore challenges, replays to try other gameplay. Hope the publisher will add more storylines to develop from the storyline of Asura and add many new features to buff characters beyond Asura’s power. “

Once again Chilly Room offers a fake, but incredibly addictive single game. Although the image of the game is not of high quality, it is still loved by many people. Of course, it will not suit anyone who likes modern game trends, graphics level. As for those who love action games, they will not ignore any attractive action game. What are you waiting for without download Otherworld Legends MOD APK to experience it!