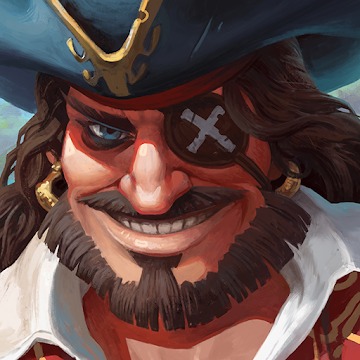 Drifting into a deadly archipelago in the middle of a distant ocean, what will you do to survive? Show your survival ability in the Mutiny: Pirate Survival RPG game. Not only is it simple to find food to survive, you also have to fight wild beasts and many other external factors.

If you have completed this game, you can try a similar game – Survivalist: invasion.

Mutiny: Pirate Survival RPG is not simply a game, it also gives you a lot of knowledge and skills on island survival. This is an epic RPG game, you need to fight and do everything to survive. So gather your gear together and lead your little crew forward!

The best survival RPG game ever

Why do we say that? Mutiny: Pirate Survival RPG is a combination of RPG game features, PvP survival game and ocean adventure game. Too many unexpected elements happen in the game that you cannot take your eyes off. The missions and gameplay are varied, although it is just an archipelago, but there are a number of areas and places to explore. Endless experience, endless attraction, that’s what can be said about this game.

You are a pirate while playing in this game. You lead your sailors toward the vast ocean. After a big incident, you find yourself on a lonely pirate island. No food, no weapons, and only a few sailors by your side. They are the people who are loyal to you throughout the journey. However, when you have nothing to lose, your true instincts kick in! What will you do to experience dangerous pirate games? Enter the game to join a real survival adventure!

In this island adventure, you must fight your way in the wild archipelago and build fortresses to protect your belongings and your life. You must become a brave pirate soon, otherwise, you will not be able to complete this survival mission. The dead cannot tell stories! Do you want to tell your pirate story?

This archipelago is not just you! The sailors will work and obey your command. Lead your crew! For the first time in the survival genre, you have a team to control. Appoint them on missions ranging from crafting to defending your fortress. Complete challenging missions and search for treasure together. Expand your team to become the best captain and build a new empire.

In the Caribbean Islands during the golden age of piracy, hostility will be unavoidable. During your survival journey, you will have to fight many other hostile empires to protect your base. They will always be lurking, waiting for the opportunity to attack you. Find and cooperate with the Taino Indians, they will help you! Besides, you let them explore the secrets of ancient tribes in the past. You will find a lot of interesting things in this!

In addition to hostility, you also have to fight wild beasts. Besides this danger, wild beasts will also be a rich source of food for your team. Having to fight hard, you will not starve to starvation on this needy archipelago. Use tools that you can hunt wild animals, sustain life.

Build your own pirate empire! Mutiny: Pirate Survival RPG is not only island adventure games, it’s also a strategy game and learn to survive using your brain. Log it for shelter and develop it into a larger base. At first, you could just use simple tools and weapons. Later you can learn how to craft more complex weapons. Team up with the Indians living on this survival island so you can get more rare items. The survival war is not without weapons, you can expand your team and grow into a strong empire.

Each location, area will have different quests. You must complete it in order to unlock new locations. In this process, you will simultaneously learn how to fabricate, how to exploit … to make a step in the journey of building a great empire in the future.

Mutiny: Pirate Survival RPG is built with sharp and detailed 3D graphics. The actions of characters or objects, works are very authentic. It gives you a real sense of survival in this game. The background of the Caribbean islands is very beautiful and countless other places that you can explore and enjoy. Combined with the background music that changes according to the circumstances, will create the best survival game.

Start your survival journey in Mutiny: Pirate Survival today and prove you’re a true commander of the dangerous Caribbean. Raise the black flag, go deep into the archipelago and build your own empire. Turn events into opportunities, develop your team into a force in the golden age of Pirates of the Caribbean.